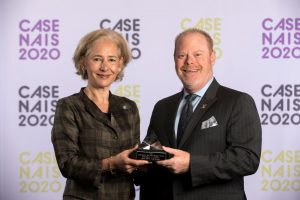 In addition to his work with Gonser Gerber, Mike has served as Vice President for Advancement at Saint Xavier High School (Kentucky), for 34 years. During his tenure, he has raised more than $100 million to support the school. He led the Xaverian Legacy campaign that exceeded its $15 million goal; Project X, a comprehensive campaign that surpassed its $28 million goal; and is currently leading the School’s $51 million endeavor, the X EFFECT Campaign.

“These honorees serve as inspirational role models for the thousands of people who work each year to advance independent schools,” said Sue Cunningham, CASE President and CEO. “They deserve unending admiration, appreciation and respect for the important work that they continue to do on behalf of the institutions they serve.”

Mike has worked in educational advancement for nearly four decades. For all of those years, he has been a member of CASE, and has served as a CASE-Kentucky board member, treasurer and president as well as creating the CASE-Kentucky Awards program. He has served as a faculty member for the CASE Newcomers in Alumni Relations conference and on the planning committee for the CASE District III Conference. He has been honored eleven times with the CASE Circle of Excellence award for Sustained Performance in Fundraising, and has received a Grand Gold award for a recruitment video. He has written for Currents magazine and other CASE publications.

The awards are presented annually based on nominations from colleagues and peers after review by a panel of senior CASE volunteers. The award is named in honor of Robert Bell Crow, a former development director at Deerfield Academy.

“Mike continues to bring his best thinking to his role as Senior Consultant with Gonser Gerber,” said Jason McNeal, partner at Gonser Gerber. “Not only does he work tirelessly at Saint X, bringing new ideas to his advancement program, but he then shares the best of those ideas with his clients and colleagues.”

In his Louisville community, he was named, in 2017, one of “20 People to Know in Education” by Louisville Business First. He has served as a board member of the Kentucky Derby Festival, Leadership Louisville’s Bingham Fellows, St. Raphael Catholic Church, St. Gabriel Catholic Church, St. Bernard School (Connecticut), Boys and Girls Club, Western Kentucky University Parent Advisory Council, and the Optimist Club of Louisville, recently completing a term as President.

Read more about the award and Mike’s incredible contributions to the profession: https://www.case.org/robert-bell-crow-memorial-award

Jennifer Spuehler has been part of the Chicagoland educational and philanthropic profession for more than 20 years. She launched the Gonser Gerber Institute in 2012 and continues to promote and execute the programs as Executive Director.

We are offering two of our cornerstone in-person workshops at the same time! The overlap will give participants the opportunity to hear from more consultants and peers, critical to the success of any advancement program. October 20 – 21: buff.ly/2VWf46v
… See MoreSee Less

Whether you’re looking for someone now, or you need to prepare for hiring new staff, our webinar will share ideas on how to hire and retain top talent for your advancement team: August 24 buff.ly/3z8wfDF
… See MoreSee Less